One Baltimore Girl Living in a NYC World

I know. You’re looking at the title, the picture above, and the name of this site. You’re confused. It’s 2019, and perhaps you’re in the wrong place. Or you think maybe I am.

Yes, you are correct: this is a website about Baltimore. I live here and work here, love here and play here. But I have a secret (and if you follow my Instagram account you’ll already know). I’m a frequent traveler to the city that never sleeps. That’s right, I have a city mistress and her name is NYC. I’m not ashamed to admit it. Everyone has a secret. But it’s 2019 so time to come clean.

And if I’m sharing secrets, I’d be wrong if I didn’t tell you to go see One Woman Sex and the City before it ends this run. What else are you doing this Friday anyway?

Seriously though, with all of the resolution lists popping up, I thought I would do something different to start 2019.

So this is the brief story about how one single girl from Baltimore and three not-so-single boys from the faraway borough of Brooklyn bonded over martinis, Berger cookies and Sex and the City, saw the one-woman show, and loved every minute of it.

I have a deep and undying love for Sex and the City. I own all the seasons, the first movie, Candace Bushnell’s book, other books – it’s my TV obsession. So naturally, when I found out about three relatively grown men watching Sex and the City for the first time ever – mostly – and podcasting about it, I had to give it a listen. And so I became obsessed with The Bradshaw Boys.

Do yourself a favor and subscribe right now. Binge listen and catch up. Trust me, you will not be disappointed. Cory, Jon and Kevin manage to work Lord of the Rings references, music trivia and dinosaurs seamlessly into their discussions – which believe me, have absolutely nothing to do with the actual series. It’s pure art. If you haven’t watched the show before, even better. Watch along with them.

I’d been an avid listener of their podcast from the beginning, so when The Bradshaw Boys had a contest to join them in seeing the off-Broadway show One Woman Sex and the City, I entered without any hesitation. Fast-forward to the Baltimore girl of just B more meeting up with The Bradshaw Boys during the holiday season. It was New York City Christmas magic.

As any good Baltimoron would do, I brought them gifts of Berger Cookies and Old Bay. (Wrapped up in Row House 14 wrapping paper. I mean, I had to represent our city well!) They returned the favor with martinis and cosmos. We went on to see the one woman show. Kerry Ipema does a fabulous job of running through all six seasons of Sex and the City – the woman plays at least 12 different characters! Kerry brings you into the show with bad dating stories shared from the audience. My story made it that night! I felt pretty special. The show is funny and lighthearted and flexible – what can’t this woman do? Kerry told me she’s hoping to tour but why wait? There are two showings to go at The Theater Center on Friday, January 4, and Sunday January 6, 2019. Go. See. Laugh. Love. 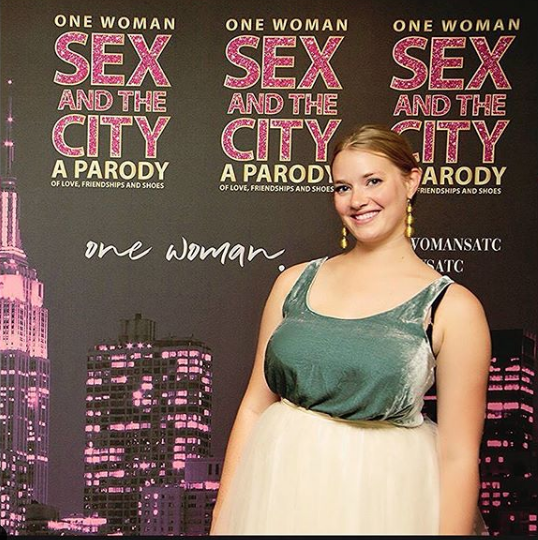 Honestly, 2018 was a fantastic year for me, Sex and the City-wise. I was able to meet my favorite podcasters, indulge in a TV series I’ve always loved, and even got a short story published in the book Sex and the City and Us. (Thank you Jennifer Armstrong!) So why am I telling this to all my readers in Baltimore? You mean besides giving you access to a great podcast and show and book?!?

At the start of 2018 I had no goals related to Sex and the City. I mean, why would I? It’s incredibly irrelevant to my daily life. But because I took chances throughout the year, I had some amazing experiences, with more on the horizon. I finally went down a road less traveled, opened the door of opportunity, rolled the dice and all of those other cliches. The point, my friends, is that as you start 2019, remember that you really don’t know where this year will take you.

I hope that 2019 brings you fun surprises, new friends, and unplanned adventures.

And shoes. (There’s a little Carrie in most of us.)

What could just B more exciting?